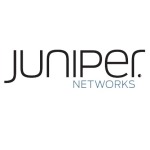 In this post I will be configuring a Juniper Junos device to authenticate  off of a local TACACS+ server.

TACACS+ is an Authentication, Authorisation and Accounting protocol that provides a centralised method of controlling user access to network devices. For more information on TACACS+ please see my previous post TACACS+ on Ubuntu 14.04 LTS.

For a Junos device to authenticate against our TACACS+ server, we first need to add a user using the Juniper Networks Vendor-Specific TACACS+ Attributes.

In this example i will be creating a super-user called junos that will be associated to the default user SU on the Junos device for authorisation.

The sample config for the TACACS+ user is as follows:

I will be using the following network topology to test the configuration of TACACS+: 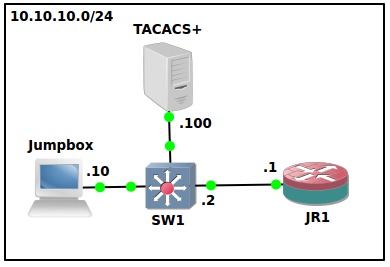 In order for TACACS+ to work the following have to be configured on the Junos device:

To use TACACS+ authentication on the router, we need to configure information about one or more TACACS+ servers on the network by including one tacplus-server statement at the [edit system] hierarchy level for each TACACS+ server.

The details for the TACACS+ server on the local network are as follows:

First we need to add a TACACS+ IP address and encryption key to the router:

Configure the device to maintain one open Transmission Control Protocol (TCP) connection to the server for multiple requests, rather than opening a connection for each connection attempt.

Next configure the source IP address that will be used when sending responses back to the TACACS+ server. Typically this would be a loopback address on the router, but in this case i have just used the IP address of the Ethernet interface:

Sample output of the configuration so far:

Now that we have the Junos device configured to send authentication requests through to the TACACS+ server, we must configure Authorisation for the user.

This is done slightly differently to Cisco, as we will be configuring a set of default users, one for each of the different classes on the Junos devices, that will provide Authorisation to the remote users. As mentioned earlier we will be associating our Junos TACACS+ user with the super-user account SU:

At this point you will be able to login to the Junos device and authenticate on the TACACS+ server. However as we have not configured any accounting profiles yet we would not be able to track what commands are issued on the device.

You can use TACACS+ to track the login’s, configuration changes and interactive commands of any user that has authenticated against the TACACS+ server. To do this we need to first configure the system accounting details. To do this issue the following commands:

Commit the changes to the device:

Terminal output from the Jumpbox:

As you can see from the above output, the user junos successfully authenticated against the TACACS+ server and was authorised to access the configuration mode of the device. A log was also kept of all the commands that were run by the user in /var/log/tac_plus/tac_plus.acct.