I logged into my PC the other day and there were kernel updates available for my Ubuntu Gnome 14.04 LTS OS so, being the paranoid type and always wanting the latest and greatest to be installed on my OS, I updated the system. No problems, rebooted and went about my business.

Fast forward to a few days later when i need to do some testing on one of my Centos Virtual machines on Virtualbox. I did the usual and opened Virtualbox and tried to start the virtual machine, only to be greeted by an error code: 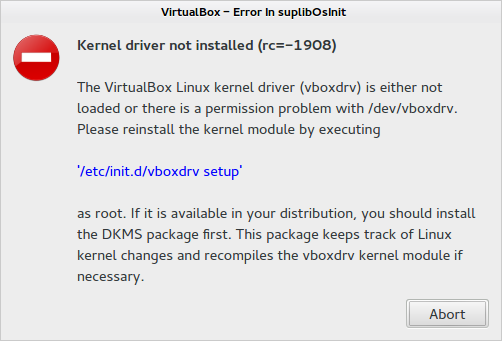 Luckily enough the error code for this is pretty detailed. It would appear that during my initial instal of VirtualBox I missed out the step to install Dynamic Kernel Module Support (DKMS).

DKMS is is a software framework used to generate Linux kernel modules whose sources do not generally reside in the Linux kernel source tree and enables kernel device drivers to be automatically rebuilt when a new kernel is installed.

A quick check and sure enough, DKMS is not installed on my machine.

To resolve the issue I am first going to reinstall the VirtualBox Linux kernel driver (vboxdrv) using the command stated in the error message:

or the following if you are not logged in as the root user:

After opening VirtualBox again after reinstalling the vboxdrv everything is working again, until the next kernel update. To avoid this happening each time there is a kernel update for your system install DKMS using the following command:

Now each time there is a kernel update for your system DKMS will automatically recompile the VirtualBox kernel modules.